As One Cowichan, should we stand up to Kinder Morgan? 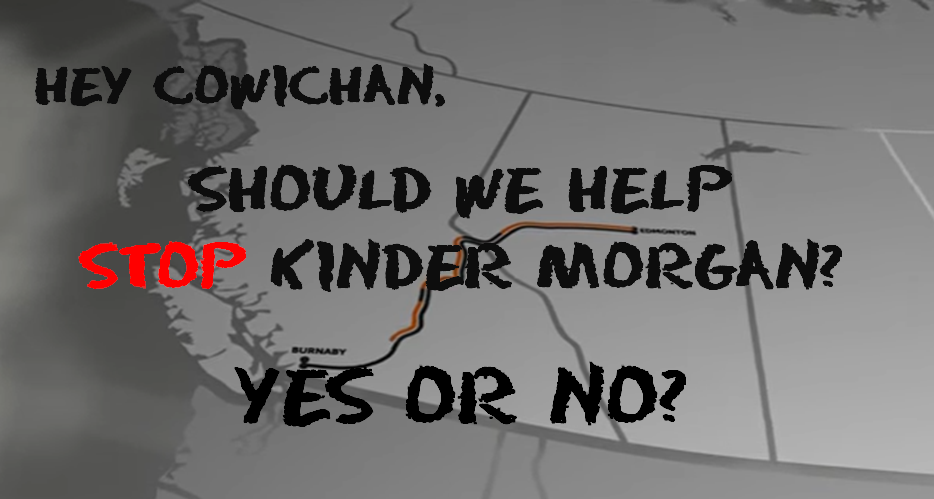 In 2014, many One Cowichan supporters joined in to stand up for BC in partnership with the Dogwood Initiative against the Enbridge Northern Gateway pipeline and tanker proposal. The idea was to build teams of volunteers in preparation of a citizen's initiative to stop our BC government from giving the permits needed for the project.

On Tuesday, November 29, 2016 PM Justin Trudeau announced that his government was rejecting the Enbridge proposal but went ahead and approved the Kinder Morgan Trans Mountain expansion project. This would add approximately 980 km of new pipeline along side an existing pipeline from Strathcona County (near Edmonton), AB to Burnaby, BC, as well as reactivate 193 km of existing pipeline. This would almost triple the transport of diluted bitumen from 300,000 to 890,000 barrels per day. I will also increase tanker traffic from approx. 60 to 400 vessels each year that would pass Vancouver along the Golf Islands through Victoria out to the open ocean.

Dogwood is now preparing to launch a citizen's initiative to try and stop the Kinder Morgan project from being built.

One Cowichan has the opportunity to participate by collecting the necessary 10% of voter signatures in each of our two provincial Cowichan Valley & Nanaimo-North Cowichan Valley ridings within a 90 day period. This would likely happen in the summer of 2017.

The decision is up to you. Are you in?