Training Reconnected With Past And Future

The recent commemoration of the 50th anniversary of the Kennedy assassination made me think of where I was on that day.  I was a 13 year-old student walking around Lansdowne Jr. High School at recess when the principal came on the PA and broke the news.

It was a very different world then, the height of the cold war was upon us.  There was an air raid siren at the end of our block that was tested regularly.   My mother was taking Russian lessons that were broadcast on channel 12, she was going to be ready, just in case.  A few years later at Mt. Douglas High School, our teachers put us all on a bus and took us to the Fox theatre to see Dr. Strangelove, the excellent film about a nuclear apocalypse.

There was a clear and present danger and the world was on a path to self-destruction.  On graduation, my teachers gave me a book called On The Beach, by Nevil Shute.  Yes, it was about the agonizing end of civilization after a nuclear war.  I can remember thinking that I would probably not live to see my 20th birthday.  Thankfully, I was very wrong with that assumption.

I attended the recent One Cowichan leadership training course for progressive thinking people in our community.  It was intense and challenging and every so often we would take a break to clear our heads and refresh.  On one of the breaks we were asked to form a line according to how long we have been involved in activism.   I was headed to the newbie end when I suddenly remembered Amchitka. 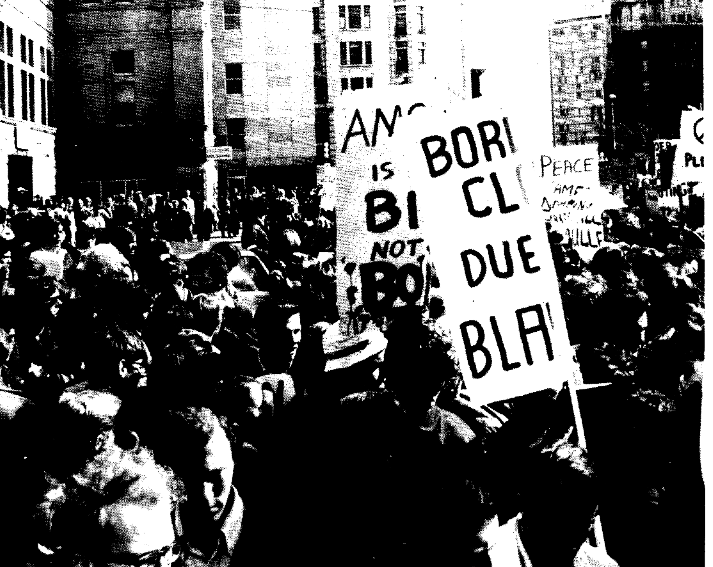 It was October 1969 and the US government had a series of nuclear tests slated for Amchitka Island, a remote volcanic rock in the Aleutians.  I was a student at UVic and the student union had organized a national protest where 20,000 students were going to close the US border for the first time since the war of 1812.  I Googled the Martlet, the UVic student paper for October 69 and saw myself in the crowd, wearing a floppy white hat and carrying a sign saying “Amchitka is for the Birds, not the Bombs.”  I was almost 20 so I thought I had better get involved and 2,500 of us went to the Black Ball ferry terminal to shut it down.    All went peacefully until one woman decided to kill some commies and tried to drive through the crowd.  We pushed back and all she did was burn her clutch.

Standing next to me at the senior end of the activist line was a man that used to work at a local sawmill and he has worked with One Cowichan canvassing to get signatures on a petition for local control of our watershed.   As we talked about Amchitka he said that he was there too, and it was also his first activist endeavor.  Our actions on that day in 1969 did not prevent the first nuclear test, but Greenpeace was formed around the protest and the pressure was increased until all further testing was cancelled at Amchitka and the island was turned into a bird sanctuary.  We had succeeded, then I turned 20 and realized I was still alive.

The series of protests by grass roots organizations in North America in those years led to some major societal changes.  Those of us lucky enough to have been born in Canada just after WWII have gone on to live some of the best and most secure lives possible, arguably ever, on this earth.  I realize how lucky I have been and how wrong I was about how I thought my life was going to turn out.  I am very happy about that.

We are now facing another clear and present danger.  Climate change is coming our way very quickly.  The science has been done and we, as a society, will have some difficult decisions to make in the very near future.  We will have to find a way to leave most of the fossil fuels we have left in the ground.  Fossil fuels are not just used for energy, but for the myriad of petrochemicals that are so essential for life as we know it.  Burning what we have left, regardless of the source, will surely lead to catastrophic climate change.

There are many among us that think we are already doomed, and there is no way out.  I used to feel that way but now I choose to look to the past and remember how we were able to make changes in our society from the ground up, and I think we must do it again.  Now.

Once again, we are lucky to live in the Cowichan Valley, with a large and growing group of citizens dedicated to help us to mitigate the coming climate change effects.  There is a very good study that was done by the Climate Action Initiative on specific changes that are expected in our valley in the coming decades.  You can see it at www.BCAgClimateAction.ca under Regional Adaption Strategies.  We will have a longer growing season and longer frost-free period.  With better control of our water resources we could grow much more food locally.  There will be a financial incentive for this because California and Mexico are running out of water quickly and their cheap food production capabilities will end soon.

We know what to expect here and we have the will and the knowledge to do something about it.  All of us can and must help with this so think about what you and your family can do to get involved.  You can start by staying informed about the issues in our community.  The coming municipal elections deserve more attention from the public and One Cowichan will be sure to keep you informed about the issues and the candidates positions.

We have several wonderful stewardship and conservation groups that are all working together to improve our community and plan for the future.  Consider joining one of these groups.    I believe that we can build a sustainable and resilient community here.   After all, nobody knows exactly what the future will bring.