Question One: How Concerned Are You About Climate Change?

The vast majority of respondents marked "very concerned," which isn't a surprise considering those most concerned may be most motivated to fill out the survey, but public opinion is also trending in this direction. 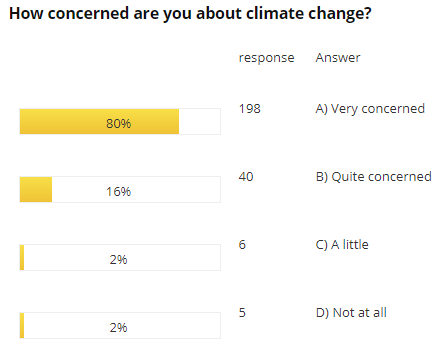 Question Two: What Aspects Of Climate Change Most Worry You?

People expressed a wide range of concerns. We thought one of the best ways to capture these would be to create a word cloud, where the more frequent words appear largest. Here's how that turned out: 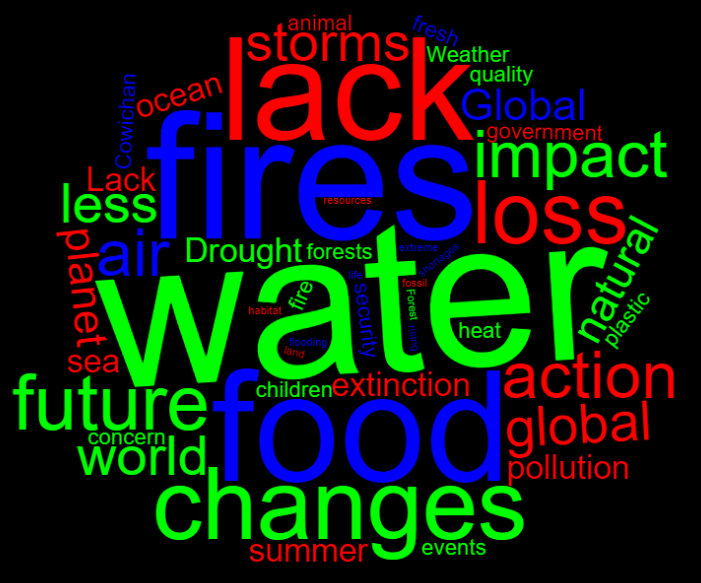 Given the impacts we are already seeing each summer on the Cowichan River due to drought, it's no surprise that "water" features prominently. Here is a selection of quotes given in answer to this question:

“Impacts to communities like drought, flood, fire and impacts on ecosystems.”

“That so many of the people with political clout and the means to do something about it, just aren't, in any seriously meaningful way.”

“I am worried about our childrens' future, and about how vulnerable people, the under-housed, disabled and marginalized, will be affected.”

“As a region with many coastal communities, sea level rise is going to have a big impact on us, especially First Nations as much of Cowichan Tribes' reserve lands are in the flood plains.”

Question Three: So Far, How Would You Rate The Response Of Local Governments In Cowichan To Climate Change?

It would appear that most people are unaware of any initiatives of local governments on climate change either because they haven't heard about them or because they aren't that strong.

Question Four: What Kinds Of Things Do You Think The One Cowichan Community Should Do To Foster More Climate Action?

There was a great diversity of answers to this question. It can be broken down into two general categories of thoughts: the various policy issues that could be worked on, and the kinds of tactics to employ.

One question to ask in terms of issues is one of jurisdiction - which ones are most properly in the domain of local government? Land use is obviously a key local issue, both in terms of whether councils are approving more sprawl vs. more density, as well as how carbon is managed in trees and soil - for example in the North Cowichan municipal forest.

In terms of tactics, again there was a diversity of thoughts. Here is a selection of quotes in answer to this question that relate to tactics:

“Put pressure on local government to declare an emergency, communicate about that effectively, and stop with the incrementalism and take meaningful action. One Cowichan can identify some specific things local governments needs to do and push hard to get them moving.”

"Raise awareness through newspaper articles, public media, speakers in our local schools, using whatever method you can to get the word out there."

"Highlight what local actions have been taken and what actions could be taken; by local government and by local agencies and by individual households."

"Constantly advertise our concern to powers that be. Rallies, emails, letters, town hall meetings, keep it at the forefront of CVRD, constantly in their faces, right under their noses. Vote for people who are leaders of local climate action."

"Build relationships between the diverse types of local people with the aim to; develop strategy, inform policy, compile reference guides to better standards."

Conclusion - What Happens Next?

Over the coming weeks we will be taking this input and shaping it into a local climate campaign. If you are interested in joining fellow citizens in this initiative, please drop us a line!