Democracy - Use It Or Lose It!

Back in the mid sixties at Mt. Douglas High School our teachers had some required reading for us that included George Orwell’s “1984” and Ray Bradbury’s “Fahrenheit 451”.  They did not think the future described in these books was desirable and wanted to make sure our generation was aware of the dangers they portrayed.

1984 portrayed a world perpetually at war with pervasive government surveillance and manipulation of private citizens.  Big Brother was in charge and his Thought Police made sure the policies of the government were correctly portrayed in all media.  Bureaucrats had a “Memory Hole” slot near their desk where any intellectual property not in lockstep with government thinking was put to be incinerated.  They were continuously revising history.

Fahrenheit 451 (the temperature at which paper spontaneously combusts) portrays a world where books are banned and people spend their entire spare time in front of wall-sized TVs.  Critical thinking is discouraged and meaningful conversations about important issues seldom occur.  In 1984 Firemen don’t put fires out, they start them.  They burn books and the houses of the people accused of possessing and reading them.

It was the sixties and we were teenagers, 1984 seemed too far away to imagine but some of the concepts stuck with me.  1984 may have brought us Brian Mulroney and Ronald Reagan, but certainly no Big Brother.  It took 50 years from my high school days for me to see what my respected teachers were worried about.

A few years ago I met Dr. Max Bothwell at a Cowichan Stewardship Roundtable meeting where he presented some interesting information about didymo, aka rock snot, that gooey brown slime that appears in our river each spring.  I worked with him to do some experiments in the river at my place.  Max is probably the leading world authority on didymo, and he has some interesting stories to tell.  Last May he was contacted to do an interview by a large media organization but it never happened.  Max is a federal employee and so is not permitted to speak with the media without clearance from federal authorities.  This process can take several weeks and does not work with the news cycles of modern media.  One of his theories about the increasing prevalence of didymo contains reference to climate change and that has all of his work red-flagged by the government.

Eric Marshall is a highly respected and loved member of our community.  He is a retired DFO zoologist who did decades of important research on our native fish.  His works and the writings of many other government and academic scientists were housed in a library in Winnipeg that was named in his honour.  Last January the federal government closed the Eric Marshall Aquatic Research Library.  They hired contractors to remove the books and burn most of them. 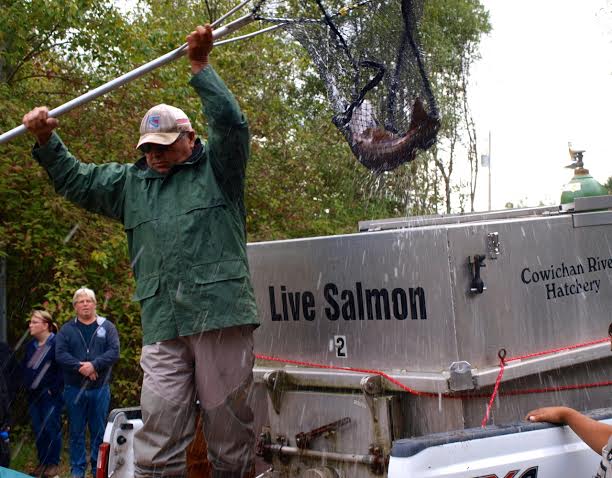 A couple of weeks ago I was asked by a DFO employee to come to the weir to film and photograph the salmon trucking operation.  This was just before our life giving rains finally arrived and the DFO was working in cooperation with Cowichan Tribes to ensure that at least a few hundred Chinook salmon were able to make it to their preferred spawning areas.  I was surprised to see the employee in civilian clothes instead of a DFO uniform and explained that because the media was there it was preferred to be anonymous so media did not ask for an interview that wasn't allowed.   I was glad to step in and do an interview, along with a few other participants, but there was no time before the 5 o’clock news for the media to get the clearance necessary to talk to the person most responsible for the operation.

This is a good news story about DFO working with First Nations and NGO’s to save our salmon, what could possibly be sensitive about that?

All this serves to underline the importance of elections.  We still have the right in Canada to determine who represents our interests.  To do this requires some awareness and critical thinking.  Municipal elections have traditionally seen voter turnouts in the 30% range.  When this happens and you are not in the 30% you are letting others determine the future of your community.

I admit to being guilty of not voting in municipal elections in the past.  I had no idea about the issues and what the candidates stood for.  I think this is a common reason for not voting and it has been addressed by One Cowichan.  Over the summer One Cowichan interviewed 697 local residents about their priorities for our community.  All candidates running for municipal offices in the Cowichan valley were then asked  the same five questions based on the survey results.  Their responses are now available here.