Election Stories From The Doorstep

As we look back at the summer just past we can breathe a sigh of relief at the outcome.  It did not look good for the health of our river and we got to within a few weeks of it running dry.  The huge amount of rain we received in the first part of September eased of our concerns and now the river and lake are full and the salmon are easily making their way upstream to their spawning grounds. 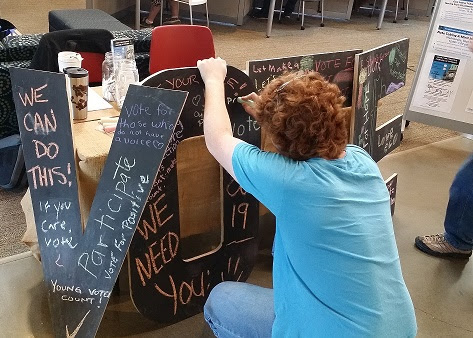 Our short-term watershed health is now greatly improved and it is time to look far into the future to see what needs to be done to protect it.  We already know we need to increase our summer water storage and we continue working towards that goal.

There is, however, a very clear and present danger facing the long-term future of our community and our world.

One Cowichan is canvassing in our community to encourage people to vote.  We are not endorsing any party but we believe that it is time for a change in our federal government and we are finding a large percentage of our local citizens agree.

I have had a couple of moving interactions on the doorstep.  At one home a gentleman answered that he was indeed going to vote because he had moved here from Damascus 5 years ago and this was the first election he was eligible to vote in.  When I asked him if he wanted a change in Ottawa he was unequivocal.  Yes, he said and when I asked for details he said that Canada used to be held in high regard in Syria but that has changed.  He said Canada is now seen as a servant of US foreign policy, not the respected peacekeeping nation we used to be.

Nearby we met a spry gentleman of 90 years who proudly and just as unequivocally announced he would vote Conservative, as he had done for all of his life.  When I asked him what he liked most about the Conservatives he replied that he had fought the Battle of Britain in WWII and our current government is the only one that will keep a strong military.

He deserves honour and appreciation for his bravery riding in bombers at the age of 18 and never knowing if he would return from each mission.  The comfortable life us baby boomers have had is due in no small part to the bravery of his generation.

When asked if he had grandchildren he said he had 8 and even a few great grandchildren.  When asked what he thought about the future they would have his expression turned serious and he admitted he was worried about what challenges climate change would present to them.

Two homes on the same block with two entirely different life experiences and worldviews.  One thing I hope we can all agree on is that we must do what we can to preserve our world for future generations.

Climate change is clearly the elephant in the room in this election campaign.  We continue to talk about head coverings at citizenship ceremonies, budgets, alleged security threats and taxes while nothing is being done about the largest threat mankind has ever faced.  It gets a passing mention every so often.  That is not good enough.  This is an existential threat.

We have already warmed the earth by about .8 degrees C and we are starting to see he effects. Scientists agree that we should do whatever we can to stay below 2 degrees.  If we get much above that we could reach a tipping point that would mean mass extinctions and very inhospitable conditions in the last half of this century.

We have the technology, we could choose to support renewable energy, create good jobs in all our communities for our youth and still have a vibrant economy.  We need support from senior levels of government and we must wean ourselves off fossil fuels as energy sources.  This is not rocket science, we can do this.

The Leap Manifesto was developed by leading scientists, intellectuals, authors and public figures in Canada and it lays out a road map for a very different future than the one our youth are guaranteed to face if we continue to do nothing about climate change.  Over 25,000 Canadians have signed it in the first week and it is gaining attention around the world.  It advocates for more equality in our society, less consumption, First Nations rights, quickly shifting financial resources to renewable energy and taking steps to redistribute the wealth being held by a very small minority of our citizens and corporations.  This dead money can be used to create jobs and support low carbon segments of our economy like health care, education renewable energy and local food production.

The Cowichan valley is already a leader in installation of solar panels.  A new “newspaper” in our community recently competed a five part hatchet job on solar energy and after all that copy they concluded that we should just plant trees instead.  Their main argument was that there is no financial gain or quick payback from solar installations.  They all but ignored the return on investment delivered by decreased hydro bills, improved property values and the benefits of a distributed grid that does not rely on fragile infrastructure to keep the lights on.

This is typical of short sighted thinking.  It is a kind of mindset that focuses on immediate wealth accumulation and reliance on big far away corporations to do the work.

Our youth are crying out loudly that they too can do the work.  They are smart, energetic and motivated.  They have the most to gain in a new, sustainable economy.  They need support and training and they can do the rest.  We do have time to make the shift and secure a bright and sustainable future for all of us.  We just need the political will.

We will all have the opportunity to start things off in a new direction on October 19th.  This is arguably the most important election in our history.  The decisions we make in the next few years will determine the quality of life for those born in this century.  They will live with the consequences but none of them can vote.

As we saw this summer, nobody knows for sure what the future has in store.  Just when it looked hopeless the situation turned for the better.  The same thing can happen for our country and our world.  Think of it as our Battle of Britain, time to shine, we can do this.