Federal Election Shapes Up for Cowichan

We’re about six months before the start of the federal election, and the battle lines for Cowichan-Malahat-Langford are firming up in what many expect to be a super close race.

At least four parties have now nominated candidates – Green, Liberal, Libertarian, NDP – with the Conservatives surprisingly the last major party not to have a nominee. 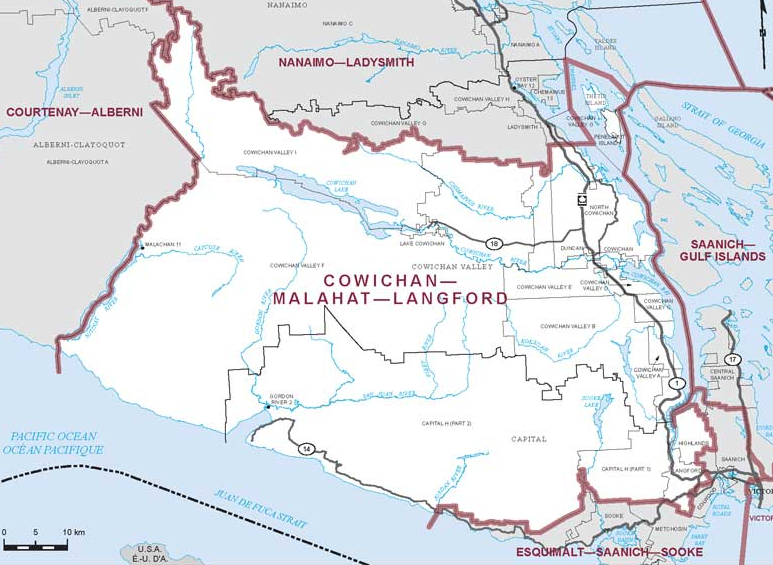 I say surprisingly, since with the addition of Langford to Cowichan in the newly drawn riding boundary, Conservative chances of a win have improved dramatically, and the party really should be in gear.

Meanwhile, publicly available numbers suggest a close race. If you run the neighbourhood level results from the 2011 election through the new riding boundary, you’d get these results:

Of course, things change. The Liberals had a disastrous showing in the last election, and we’ve also seen more prominence from the Greens.

Polling aggregator Eric Grenier has a projection model based on regional polling averages and other factors that he uses to make predictions about ridings. Based on current regional polls, here’s how he’s calling Cowichan-Malahat-Langford:

Now, neither of these assessments is based on a current riding level poll, and we are a fair way from an election, but no matter what, expect that we’ll be getting a lot of attention from the parties who know this riding is a toss up.

Also expect a lot of debate about “voting your conscience” vs. “vote splitting.” There is no love lost for Prime Minister Harper among a majority of this riding’s voters, but there is the real prospect of electing a Conservative with just one third of the vote because the other two thirds gets divided by three.