When we woke up on October 20th, we rose to the potential of a new Canada.  Justin Trudeau and the Liberal party surprised many with the strength of their majority and we will now turn the page on the Harper Government.  I was impressed with his speech and with his very positive message of unity.  He made several promises during the marathon campaign and we must now hold him accountable for what he said his government would do in the coming years. 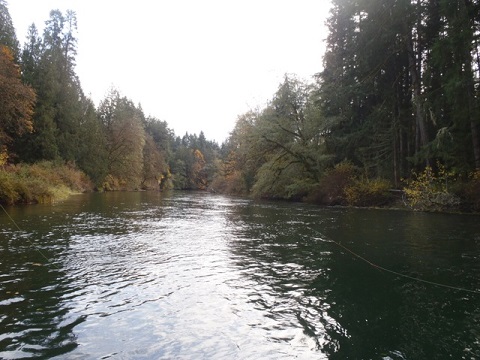 At the October 20th Cowichan Watershed Board meeting there was a very positive feeling and there were many broad smiles among the participants.  First Nations representatives, elected officials, federal government employees and conservation group members were all very happy with the results and the prospect of a new approach from our federal government.

On the agenda was a report on our chinook salmon, where Cowichan Tribes biologist Tim Kulchyski reported that 2,300 adult chinook had passed the counter before it was removed on October 16th.  The counter was removed a bit early due to concerns about a rising river level and it is estimated that about ¾ of the run would have been counted.  This means we are still short of our goal of 6,500 adults but the rains we got this September helped the fish we did see get to their spawning grounds where they are now actively producing the next generation.

David Slade showed us how successful the watering restrictions put in place last summer were in reducing our water consumption.  When Stage 3 water use restrictions were put in place last July 3rd our community responded by reducing water use by about 1/3 in the first 2 weeks.  By September 18th we had reduced consumption by 50% of June levels.  Brown was the new green for our neighborhoods and dirty cars were cool.  Well done to all of us for responding to our water crisis so effectively.  We now need to address this annual drought problem with renewed vigor.

There were several discussions about the current status of our infrastructure project, the re-construction of our weir to store more water in the summer.  There are a few different initiatives being pursued by Catalyst as well as the CVRD and Cowichan Tribes.

Brian Carruthers from CVRD explained the status of the funding application in place for the weir project.  He is optimistic that the application will be successful and the CVRD has created a function to accept the money and administrate the weir project.  The federal government is involved with the grant process and the change of government may delay any announcement until January.  Before any work can begin a water storage license needs to be obtained to increase summer storage and this is still in process.  This is something a more engaged federal government might be able to assist and expedite.

The process involved with the weir re-construction is very complex and it is not expected that we will have a new weir until 2019.  This leaves us vulnerable to the annual summer droughts for another 3 years and Catalyst is taking measures to mitigate the storage problem for the interim period.

Catalyst is applying for a license to pump water over the weir, if necessary, in the fall of 2016 and 2017.  This project was seriously considered for this year and was cancelled when we got our precious early fall rains.  Catalyst is being proactive and seeking a Short Term Water Use license under Section 8 of the BC Water Act to enable this pumping should the weir reach zero storage in the next two years.  This license would enable pumping of 5 cubic meters per second of water from the lake over the weir and into the river.  This would prevent the river from running dry as it very nearly did this fall.  30% of this water would be used to keep the Catalyst mill functioning and also provide water for the community of Crofton.  The remaining 70% of the water would benefit the fish in our river by maintaining river flow.  Catalyst would fund the pumping operation.

Another measure catalyst is considering is the possibility of temporarily increasing the storage capacity of our current weir.  Engineering studies are being done to determine if the current weir could handle the increased lateral load of an additional foot of water stored behind it.  If the weir can handle the increased load, Catalyst will apply for a temporary storage increase and design brackets to be installed on top of the weir to hold blocks that will effectively raise the weir.  This could be in place by next summer.

All of these projects will be of great interest to our community and Catalyst will be holding an open house to explain their proposals and answer questions.  This open house will be held on Thursday November 5, 2015 at the Centennial Hall, 309 South Shore Rd. in Lake Cowichan from 6 pm to 8 pm.  You may also provide feedback at  [email protected] or by writing to Catalyst Paper, Box 70, Crofton BC, V0R 1R0.

Objections to this application may be filed with the Regional Water Manager, Ministry of  Forests, Lands and Natural Resource Operations, 2080 Labieux Rd. Nanaimo BC, V9T 6J9 until November 29, 2015.

It is important for all of us to understand the details of how we can work together to solve our annual and increasing drought problems.  The change of federal government can only help us to achieve our goal of increased water security for our community.