As I watched the rising plume of smoke above the wildfire near Highway 18 I was reminded of the effects of climate change we are now facing.  It is not only the river and lake that are suffering from the lack of rain but also the forests that surround us.

Our house is in a forest dominated by large second growth fir trees.  We are used to living in a constant rain of dry fir needles that come down whenever the breeze blows.  The last few summers we have noticed a lot more needles than usual and I think the trees shed them as a defense strategy in drought conditions.  This is happening in all the forested lands on southern Vancouver Island this year, creating very hazardous conditions and increasing the risk of wildfires. 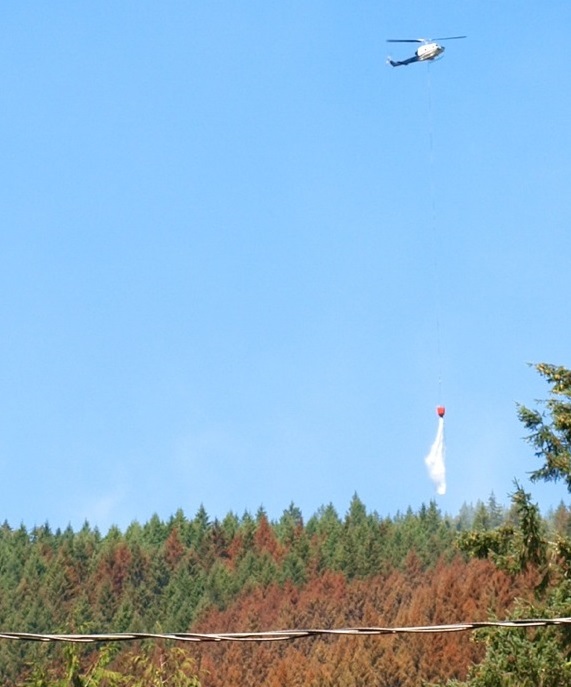 At the time of this writing the Hwy 18 fire is still burning but the authorities are confident that it will be brought under control soon.  I hope they are right.  Many brave firefighters from Lake Cowichan and Sahtlam have been in attendance and their efforts are greatly appreciated.  The aerial attack from helicopters and the Mars water bomber was impressive to watch and the quick response is being credited for slowing the growth of the fire.

This very visible wildfire should remind us all to be extremely careful whenever we are in forested areas this summer.  A campfire ban has been in effect for months and I have seen signs on trailheads saying no smoking on the trails, all of this makes very good sense.

What doesn’t make sense is that logging activities are still being permitted in our forests in the middle of one the most severe droughts in memory and with an extreme fire hazard rating in many areas.  I assumed that there was no logging going on and was very surprised to hear that the Hwy 18 fire was believed to have been human caused in an active logging area.

The pictures I have seen of the felled trees burning are shocking.  Slash piles in these dry conditions are extremely flammable.  Forestry jobs are important to our community but these jobs are not as numerous as they used to be.  The prevalence of raw log exports sends most of the value in these privately owned trees outside of our community into the pockets of the shareholders of large timber companies.    Meanwhile, provincial taxpayers are picking up the tab for most of the cost of fighting these fires.  I hope that the government will take notice and suspend logging operations soon until we see safer conditions.

There are still large chinook salmon swimming up the river and about 70 have so far been counted at Stoltz but only a few have been seen above Skutz falls.  They are probably holding in some of the deep, cool canyon waters and swims are being done to try to find them.  They may not be able to get past Skutz falls in the low, warm river.

Provincial divers swam the river last week and noted that the trout are doing fairly well.  They are all in their summer holding areas where cool water enters the river.  The brown trout seem to be doing better than the rainbows, some of which are starting to show signs of stress.

For many years, retired guide and lifetime river resident Joe Saysell has been asking for a summer sport fishing closure and his efforts may have finally been rewarded.  The province has closed the river, and most other south Island rivers, to all fishing until further notice.  Hooking fish under these conditions puts unnecessary stress on them and could kill them in the high river temperatures we are seeing.

There has been little change in our river conditions in the past few weeks.  We are still running at 5.5 CMS and the recent rains had little effect on the lake levels.  Our projections for arrival at zero storage are still around the last week of September.  If we reach zero storage the river flow will decrease and it is likely the mill will have to shut down.  Catalyst is requesting an immediate drop in river flows to save water and if we do that we could delay arriving at zero storage by a week or so if we get no significant rain this summer.

The Flows and Fish Working Group is a committee made up of local politicians, Watershed Board members, First Nations, Federal DFO officials, Provincial MOE and FLNRO Ministry representatives and conservation groups.  It has been given the task of determining the permissible river flow reductions and swim surveys are being done to decide how much further reduction will be allowed.  The decision should come in the next week.

There have been some positive developments on the weir reconstruction initiative.  Catalyst’s Crofton mill has a new General Manager and after he had been on the job for only a few days he met with senior CVRD and Watershed Board members and Cowichan Tribes Chief Chip Seymour last week to discuss increasing water storage at the lake.  All reports are that this meeting was very positive and constructive.  It seems likely that Catalyst will work with our community leaders to move ahead as quickly as possible to reconstruct the weir.

Their increased engagement in this critically important project will be a very important step as we work together to ensure the long-term viability of the mill, the watershed and our community.