I had a very memorable day fishing on the Cowichan River in March.  The heavy rains we had in February and March had the river running at a healthy 120 cubic meters per second (CMS) and the steelhead were holding in a very large group close to shore.  I was able to reach them with about a 20 foot cast while sitting on a log sticking out into the flow.  I hooked 5 steelhead in about an hour, pretty incredible fishing.  I am sure I was not alone with this kind of success as anglers all winter and spring very frequently visited this fishing area. 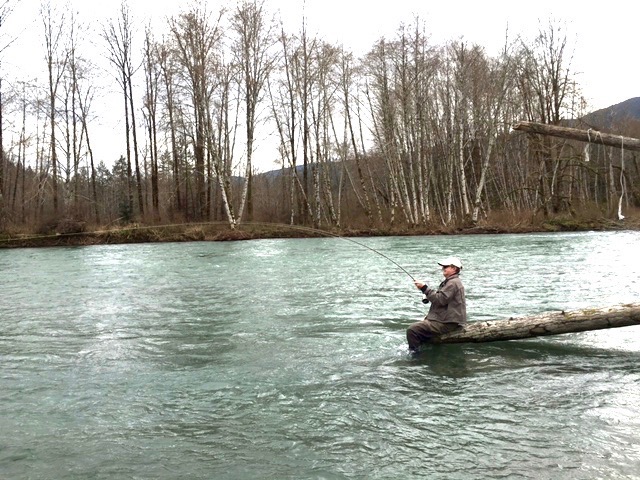 The winter rains have not been consistent over the past few years but we had them this year and the salmon, steelhead and trout enjoyed having a big river to spawn in.  They were able to utilize spawning beds that had been dry for the past few years, greatly increasing the available space they could use.  There is a risk, however, when the fish spawn high up the side channels and near the edges in a big river in winter.

We have just endured two consecutive very dry months in April and May where we have had only about a quarter of the normal amount of precipitation.  We saw about half of what used to be considered a “normal” snow pack last winter and the unseasonable hot weather in May has melted most of it.  There is little or none left to replenish our lake water levels.

As a result of this early spring drought we never reached “full storage” in the lake, meaning the weir was never at full capacity in April.  All the water we got in February and March simply spilled over the top of the weir, down the river and out to sea.  The weir was full in March, but by April it started dropping below full storage.  Current provincial operating rules prevent us from holding back any water in the lake before April.

Early in April we realized that we were in a very bad situation for water storage and when the spring rains did not come, we had to take emergency measures to ensure the river had any water left in the fall.  We had to reduce the river flow down to the minimum allowed 4.5 CMS in May, which has never been done before.

If we had maintained the “normal” operating flows in the spring the weir would have been at zero storage on July 7, meaning that without significant rain, the river flow would slowly decay below 4.5 CMS and go into uncharted territory of dryness.

The lives of all living things in the river would be in serious jeopardy.

Here is where the bountiful full river from last winter has caused a problem for spawning steelhead and salmon.  When we reduced the flows in spring so drastically many of their spawning beds were dried out, particularly the ones they used high up in high winter flows.  This required a concerted and coordinated fry rescue program to save as many fish as possible while the river flows were reduced. 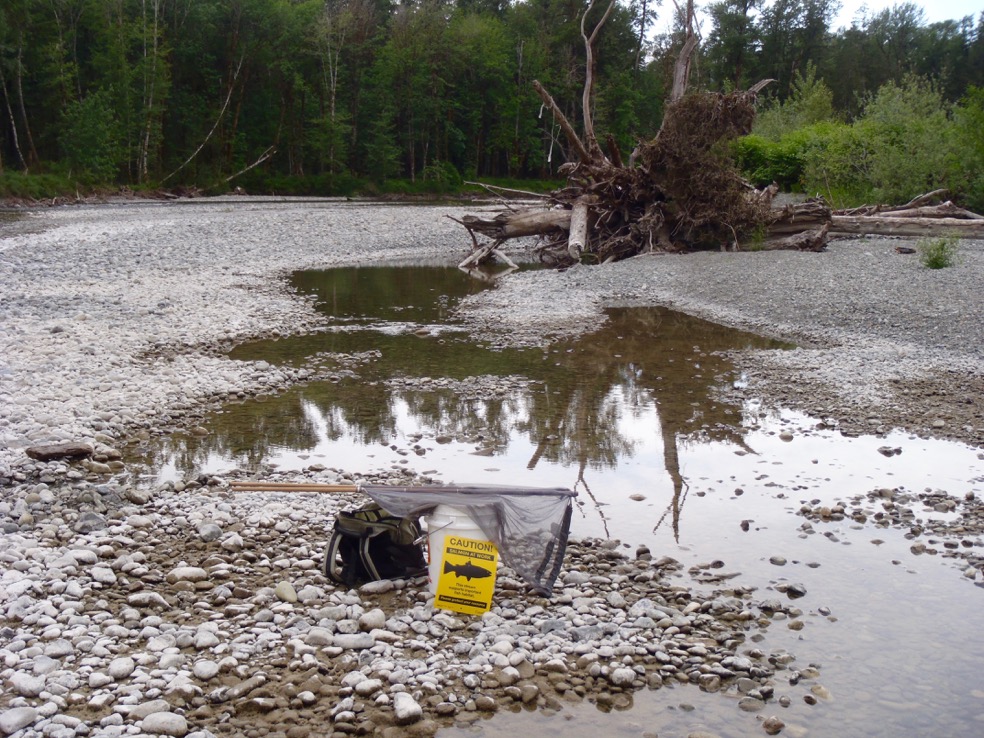 Catalyst worked with the Cowichan Watershed Board (CWB) Fish and Flows Committee to help coordinate fry salvage activities. A contractor, LGL, was hired to assess the river and locate vulnerable spots where fry were trapped in disconnected pools.  Workers, most of them volunteers, from Cowichan Tribes, Friends of the Cowichan, One Cowichan, The Cowichan Lake and River Stewardship Society, Lake Cowichan Salmonid Enhancement Society, the Lake Cowichan Band, provincial and federal agencies and other groups shared information and worked together efficiently to address the crisis and save the stranded fry.

I returned to the log I sat on in March and found it high and dry with thousands of steelhead fry below it in a stranded pool.  Over a week I moved 11,500 steelhead fry and 400 coho fry back into the river at this spot.  That should return over 100 mature steelhead in 4 years.  I plan to be sitting there again when they come.

With the flow now down to 4.5 CMS the efforts are now nearly done.  Moving fry into what is left of the river and lake saved many thousands of them but their fate is still uncertain.  If we get no significant rain this summer our zero storage date is now the first week of September.  The fish and all other creatures in the system will probably have to endure low flows and very high temperatures again this summer.

If zero storage is reached, Catalyst is prepared to pump water over the weir in order to keep the river running.  This would involve large diesel generators stationed at the boat lock and about 20 submersible pumps to move about 5 CMS into the river.  The lake level would then start to drop below the bottom of the weir for the first time since the weir was built in 1956.  The permit Catalyst has would allow the level of the lake to be dropped by up to 2 feet.

This is not a very attractive proposition but it is supported by the CWB because it is clear that we have to try to keep the river flowing.

The CWB has made it their top priority to increase summer water storage by raising the weir.  Clearly we need to be able to hold back some of the bountiful winter rains behind a higher weir earlier in March so we can provide adequate flows for fish, industry and our communities during our increasingly dry summers.

Studies are being undertaken to determine what flows are required for the optimum health of our river during all seasons of the year.  Once these flow rates are determined the engineers can decide how much increased storage will be required to meet those objectives in the context of climate change and the increasing needs of our watershed.  This work should take about a year.

We are still a few years away from having a new weir that will be capable of providing the water we need in the summer and fall.  We will have to continue to improve our mitigation strategies in the coming years and lobby our senior levels of government for infrastructure support for our Heritage River.

Public education and awareness will be important components of the weir initiative.  There will be lots of communication about this issue as we struggle through yet another dry summer, which now seems likely.

It has been a very long and hard road to get to the goal of increased summer water storage but the end is in sight. In a few years we can look forward to enjoying the long, sunny and warm summers we can expect in the future without as much worry about our precious water resources.