Ten weeks ago, 12 employees voted unanimously to strike after negotiations stalled over a two-tier wage proposal for new hires at the Cowichan News Leader Pictorial. The idea is that new people coming into the company start at a lower rate than the current lowest rate. 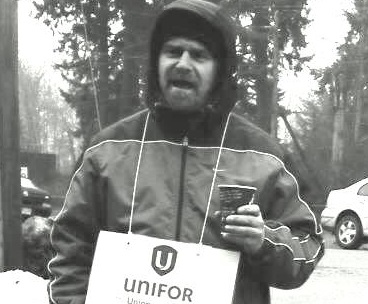 Then, as senior people leave the paper, their rate of pay is struck from the scale. That is, no one will ever make the highest rate of pay being earned the employees who work there now. This is the proposal that Black Press will not negotiate. Their rationale to us? “Those who are currently employed at the paper will not be affected.” If it doesn't affect me, why should I care?

I love the Cowichan Valley and I'm proud of the work we do at the News Leader Pictorial. We print local news supported by local advertising. That's the relevance of a community newspaper. Without us, you won't learn what's going on in City Hall at the same time you can see pictures of your kid's concert or sports event. The service we provide to the local community is important. I feel we do an excellent job of it. That's my source of pride–the service we provide to the community which I love.

And that's why the two-tier wage affects me. The local economy supports my work. I, in turn, want our local economy to prosper. Lowering wages for future employees doesn't sound like local economic prosperity to me.

Being on strike is the opposite of progress. It is the most terrifying and boring economic endeavour known to humankind. No one knows what is happening. Don't ask. Every shred of information - rumour, conjecture, even wish - is scrutinized, analyzed and discussed beyond reasonability on the picket line. Progress can only be measured in horn honks and waves from passing cars as well as in doughnut calories and Tim Hortons coffee cups.

The picket line is the last place to come for information. Take, for example, Black Press's proposed purchase of the Cowichan Valley Citizen. We don't know anything. Literally and metaphorically, we are standing outside. We are concerned. We hear/surmise/project that one or neither of the papers will close, become once-per-week publications, that there will be layoffs, etc. We would have those same concerns if we were inside working as well. And, if you enjoy access to community news or if newspaper advertising is part of your business marketing strategy, you should also be concerned. You should contact Black Press directly to discuss exactly what their plans for your community papers are. Those plans are rarely published, and definitely won't appear in the News Leader Pictorial.

So for now we wait and we walk. We pore over that sad excuse for a Friday Edition looking for clues and get angrier and more resolute. We ask for support in the form of messages and calls to Black Press to get back to the table and negotiate. We worry and hope and try to believe that this job action is worthwhile.

How's the strike going? Into week eight of our job action against Black Press, my answer is always the same, “It sucks. It's still going on.”