Our Fish Are Threatened, But Resilient

This summer while fishing for chinook salmon on the Dean River we noticed an absence of larger salmon in the 25 pound and up class.  These fish would have been 5 years old and they were largely absent because of some catastrophic floods that occurred in the Dean in 2010.  The salmon had spawned in the fall and the subsequent floods destroyed many of the spawning beds, killing most of their eggs.

Fish are surprisingly resilient creatures. They have evolved to withstand nearly anything that Mother Nature can throw at them.  In the next few months the fish in our river will experience one of the biggest challenges they have ever faced.  They will have to survive very high temperatures over the next few weeks and low flows through September and possibly October. 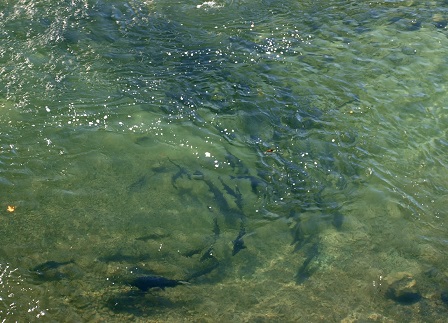 One of the great adaptions salmon and steelhead have developed to cope with ecological disasters is to return to spawn in their native rivers at different ages.  Chinook salmon and steelhead in particular can be several different ages when they return.  Coho and chinooks also have jacks, which are very young precocious males that return with the larger mature fish.  This strategy helps to re-seed the rivers if a particular year class is nearly wiped out like the chinooks in the Dean were five years ago.  It is likely that this evolutionary safeguard will be put to the test in our river this year.

We are doing all we can to monitor and protect the fish that are in our river today and those salmon that will be trying to enter the river in the coming months.  The Watershed Board Fish and Flows working group has decided to support the reduction of flows in the river to 4.5 cubic meters per second.  By reducing the flow we can extend the time before we reach zero storage to the first few days of October, barring significant rainfall.  As a condition of this flow reduction Catalyst has agreed to work with Cowichan Tribes, provincial and federal authorities and conservation groups to mitigate the effects of these low flows.

Catalyst has agreed to fund flow and temperature monitoring in all areas of the river.  They will support juvenile fish monitoring and salvage operations as well as monitoring upstream migrations of spring and fall Chinook salmon with swim counts.  They will also supply funding for salmon trucking operations that are now being planned to help the fall chinooks reach their spawning grounds in the upper river.

This is just another example of our community working together to help build resilience to the effects of climate change.

We have a long history of stewardship concerns in our watershed.  I recently obtained an interesting newspaper article from the Victoria Colonist that was in the Sunday paper July 8, 1951.  The author, Paul W. Smith, was an angler who first fished the Cowichan in 1898 when visitors from Victoria had to spend the night in Duncan and take a stage coach the next morning get to Lake Cowichan.

He had some very interesting observations on the fishery stating “There were few fishermen but there were many fish—a hundred where there is today but one”.   He noted that most of the fishermen were “Globe trotting Englishmen of the old aristocracy” who had taken very long journeys to fish the Cowichan.  These gentlemen clearly loved and respected our river and it’s prize rainbow trout.

Mr. Smith was very concerned about the apathy he perceived in the community about the health of the fish and the importance of the fishery for tourism.

About Lake Cowichan he stated, “Today, they have a logging-boom town, but what of tomorrow?”  Later he added, “In these days of skyrocketing timber prices I can understand that for many the trout of the Cowichan River seem of little importance.  But these trout could be a permanent resource worth more, in the years that lie ahead, than all the get rich quick wealth that has been realized from the timber that is now all but gone”.  In 1951 there was almost no old growth left, “And now a century, at least, must pass away before there is another crop”.

These words, written 64 years ago, still ring true today.  The crops of trees being harvested today are far less than a century old.  The old trees in our watershed are now all but gone yet our trout and salmon still endure.  They have survived all the challenges humankind has presented and our sport fishery is still a very important and renewable revenue source for our community.

Even today, with the low flow and warm temperatures, the salmon are swimming up our river.  This morning the DFO technician downloading data from the mid-river fish counter said that 43 salmon had been seen in the past few days.  These fish are very tough and are determined to survive.  Their resilience inspires many of us to fight hard for them and all other residents of our watershed.

Our fish are about to face one of their biggest challenges yet.  It appears likely that many of them may perish this fall but we know they will be back, with our support.  That is what keeps us going every day.

The summer water storage problem is now being addressed with renewed vigor.  It is too late for this year and probably next year as well but we know we can repair our river and rebuild our fish in a few years.  All is not lost, quite the contrary, our fish have proven they can recover with our help and careful attention.  While we work to improve the health of our fish we are also helping our watershed to sustain us for generations to come.