Tom Rutherford of the Watershed Board laid out the challenges that salmon face in a changing climate, noting that it's only really the rivers on Vancouver Island that have some water storage ability that will be able to sustain certain populations of salmon into the future as weather patterns change.

Tom showed the graph below that has made its way into public debate - the one showing this year's Cowichan Lake level to date, and how it sits well below past years. The darker red line shows zero storage in terms of the ability of the lake to feed the Cowichan River into the Fall before the rains come back.

As you can see, this year we are going into the summer with a much lower lake level (the black line), which makes zero storage much more likely, as well as the prospect of a Crofton mill shutdown and more hardship for salmon populations that need water to get home. 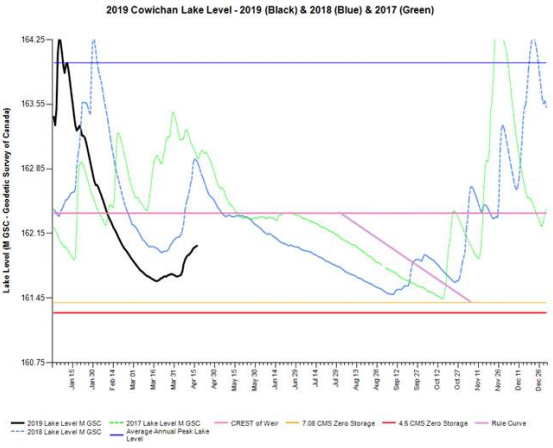 This is climate change in action, with impacts right here and right now. We can adapt somewhat, and in this case raising the weir at the intersection of the lake and the river is a way to store more of the winter rains to see us through dryer summers. That solution is grinding itself along, hung up in part on the legalities of who will hold a new water license, with the Province seeming reluctant, but the urgency obviously growing. Meanwhile, this year we can only pray for more rain.

Then there was another graph. This is the one we're not yet talking about as a community. It's also about water, but of a different kind. It was shown by Jeff Moore who does climate risk assessments for the CVRD.

Back in 2011 the BC government told coastal municipalities like ours to start planning for sea level rise. The world has already experienced over 20 cm of rise over the last 120 years, but the real issue is acceleration - the rate of rise is set to dramatically increase as ice sheets in Greenland and Antarctica are lost. (A recent study found the world's biggest ice shelf in the Antarctic melting 10 times faster than anticipated).

The second graph shown by Jeff charts this out. The 2011 planning curve (the solid red rising line) is scary enough, with half a metre rise by 2050 and a metre by 2100. But new studies say that line is too conservative and that we may have - as per the red dotted line - a metre of sea level rise closer to 2070 and much more than that by 2100. How bad it gets depends in part on how quickly we reduce emissions. 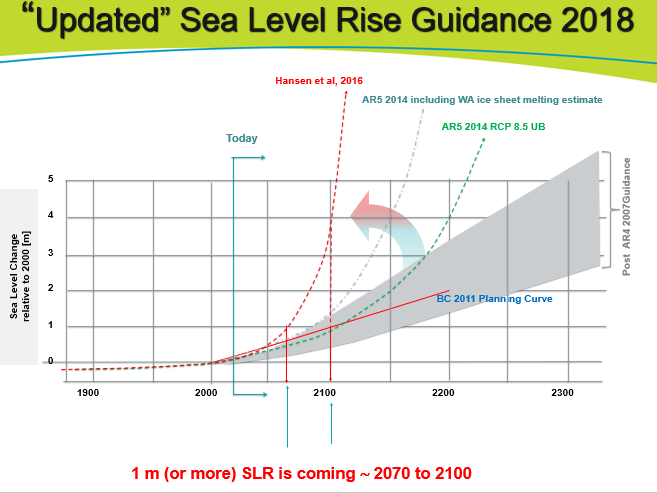 A metre of sea level rise is obviously devastating for coastal homes and infrastructure. Think, for example, of Cowichan Bay, but also note that much of Duncan from the Cowichan Estuary through to Lake Somenos and Lake Quamichan is low lying and at risk. And, a metre of rise within 50 years is well within the life of new buildings and roads that are currently being planned. Cities like Surrey are talking about "managed retreat" for some areas.

There is a clear climate justice issue tied up with these graphs because it is Cowichan Tribes members who are already bearing a disproportionate share of the cost. They have already seen their food fishery curtailed due to low river levels, and their reserve land is located in low-lying areas threatened by sea level rise. Cowichan Tribes members are already dealing with a housing crisis, and climate change could make that worse.

Our local governments in Cowichan are not yet taking climate change seriously enough. Other cities and towns are declaring a "climate emergency" and asking staff to present options for doing more, both to reduce emissions and to adapt to the climate change that is already baked in.

North Cowichan, for example, produced a good climate action plan in 2013 with all of the right measures for council to implement, but then the "action" part of the plan was largely forgotten and we've had five years of mostly business as usual, including approval of more sprawl that leads to more car use and more emissions. In short, we're still heading in the wrong direction, making the crisis worse.

We have no choice but to change course, or changes will be forced on us. Low water levels in the Cowichan River are a good example of this - once things get beyond a certain point, there's no choice but to act, or lose the mill and lose fish, etc. Sea level rise will also force changes. The video below is a taste of some of the flooding that will only get worse.

The real question is whether we are pro-active and manage this transition well or reactive and manage this transition badly. That's up to our local elected officials, to actually act on what the studies say, starting today. It's also up to all of us to start talking about these issues and encouraging our elected officials to follow through. You can add your voice to making this happen by signing the petition here.