Time For A Worker Owned Newspaper In Cowichan?

Black Press is blocking attempts to have mediation end the three and a half month strike at the News Leader. Employees went on strike in December to stand up to an attempt to pay new employees less money. 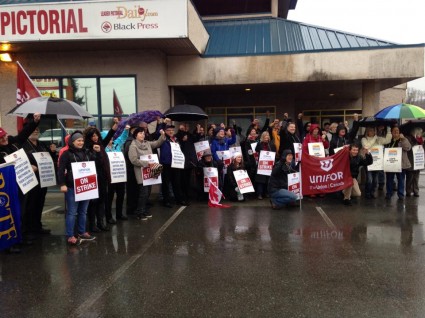 Meanwhile, Black Press is doing a deal with Glacier Media to buy several Vancouver Island papers, including the Cowichan Citizen. This will lead to Black Press having a print media monopoly on the Island outside of Victoria.

Many wonder whether Black Press will continue to keep two newspapers in Cowichan. It seems unlikely.

Perhaps it’s time to consider a worker owned community newspaper in Cowichan instead.

There are great Island precedents with worker owned businesses, including CHEK-TV in Victoria that went that route five years ago and is now flourishing. The Governor General recently toured the Harmac mill in Nanaimo that employees similarly bailed out seven years ago.

It’s never a good thing to have so much media control in the hands of one company, with David Black already showing that he’s not afraid to use his papers' editorial pages to promote his own business interests, namely an oil refinery on the northern BC coast.

With talented local newspaper experts either now on strike at the News Leader, or worried for their jobs at the Citizen, this may be a great time for those willing to own their own local paper.

The community would be behind them.