Two Little Victories For Our River

For the past twelve Tuesdays I have been working with a small but dedicated group of volunteers monitoring and rescuing salmon fry in the tributaries of Cowichan Lake and in the side channels of the Cowichan River.  When we started in March the rivers were flowing well and salmon fry were hatching out of the gravel everywhere.

Using fry traps we catch the tiny fish, measure them and determine their species.  When we see fry in pools no longer connected to the stream we capture them in hand held nets called pole seines, put them in buckets and move them to the main part of the stream where they can have another chance at life. 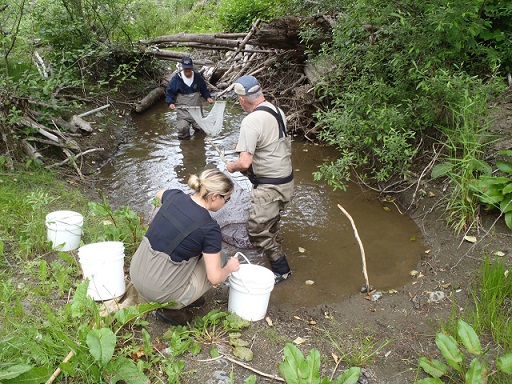 It is physically demanding work, but it is very rewarding to save the fish.   The tiny fry have only about a 1% chance of returning to spawn as adults so they need all the help they can get.

I have seen some amazing places like the Emerald Canyon and Elk Gardens of Shaw creek and watched as the forest and streams have changed with the explosion of life that is our spring.  I have enjoyed my packed lunches in some incredibly serene places.

For the past month, however, the serenity has been disturbed.  It is as if someone has turned off the taps up in the mountains and all of the tributaries are quickly running dry.

We have been shocked by the reduced flows we witness from week to week.  Only a few of the tributaries have a continuous flow over the ground.  Most are at best a series of disconnected pools in huge piles of gravel with some subterranean flow.  To date we have rescued well over 10,000 salmon fry stranded in these pools and in many cases we have had to carry them long distances in buckets with aeration systems to release them in the lake so they can continue their lives.  Many more thousands will have been lost to predators in pools we did not make it to in time.

We have just experienced our driest May ever.  Both Vancouver and Victoria airports recorded the driest May since records started in 1937.  Temperatures were up as well, averaging two degrees above normal.  This is not what we were looking for in a year with no snow pack.  The lack of snow and rain is the reason the tributaries are running dry so early in the season.

The recent algae bloom in our lake is another symptom of the lack of snow pack.  The only other time it has been recorded here was in 1941, the last year we had no snow in the mountains.  The lack of melting snow has increased the lake temperature, which is a factor in the algal bloom.

Clearly, without spring rains, we are headed for an extremely difficult situation this fall.  The weir is well below full storage and dropping.  Inflows from the tributaries are estimated to be about 4 cubic meters per second (CMS) while the river flows are around 7 CMS, which is important for fish health.  It is likely the river flow will be further reduced to conserve water as much as we can in the coming weeks but we will not reach full storage this year without lots of rain in June and July.

The good news is if we do get some rain this spring we will not likely be required to dump it by the provincial government, as we have had to do in the past.  I thank all who wrote emails and letters to Forests, Lands and Natural Resource Operations Minister Steve Thomson requesting that we be able to store more water than the current “Rule Curve” allows if we get rain.  It appears that our voices were heard.

A few weeks ago when a delegation of our community leaders visited Mr. Thomson they were very pleased with his reaction to our concerns over water storage in the summer.  Unlike the last time the increased storage request was denied in 2012, he seemed very motivated to do whatever he could to allow us to and keep any water we are lucky enough to get behind the weir this summer.  This is, of course, hypothetical , as not much rain is expected this spring.

Another boost for our ability to store more water in the summer came last week as the Environmental Appeal Board finally gave us their decision on the matter of the appeal from six lakefront property owners who challenged the 2013 decision to allow us to keep full storage for an extra three weeks in July.

In the 35-page decision several points were made that will enable us to reconstruct our weir and store much more water in the summer.  The most important ruling was that there is no expropriation of private land below 164 meters in elevation, the average winter high water mark.  This means that there is no compensation required for water that may be stored on private lands in the summer as long as it is below the winter high water mark.  The top of our current weir is only 162.37 meters, so there is lots of room for increased storage.

Another very important ruling was on the importance of downstream benefits.  This means that critical river flows are recognized as important for the ecological values we all enjoy as well as the continued operation of the Catalyst mill and water used in agriculture and private wells.

The ruling acknowledged that due process had been respected and all views were heard and understood.  This was a long and expensive process but now that all these facts are on the record it will make the process of applying for a new water storage licence much easier in the future.

The CVRD has applied for 10.4 million dollars to reconstruct the weir.  We know what has to be done, let’s get to work.  We should aspire to start construction next summer.  Climate change is happening quickly and we need to act just as quickly to respond to it.  We are very lucky to have the option to store the water we get in the winter for our use and enjoyment in the warm and sunny springs and summers and falls we can look forward to in the coming years.