Two years ago, the people of Shawnigan Lake were informed of a proposed plan to turn a quarry, located on Stebbings road, at the top end of the Shawnigan watershed, into a contaminated soil site. 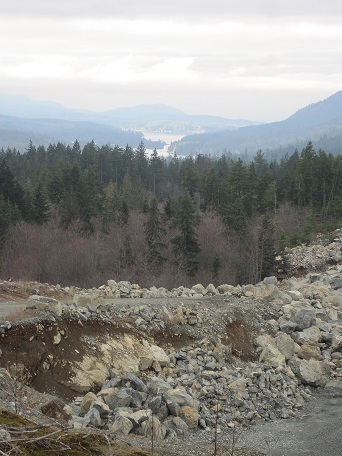 The proposal would allow South Island Aggregates (SIA), a gravel company, to bring in 100,000 tonnes of contaminated soil each year for 50 years and dump it on their site, while still operating as an active quarry.  The contaminants listed in the permit include dioxins, furans, phenols, hydrocarbons, arsenic, lead, chlrorides, and a myriad of other toxins and chemicals known to be harmful to human health.

The people of Shawnigan were united and vocal in their resistance to this plan, but their opposition has been consistently and steadfastly ignored.

In March 2012, the Ministry of Environment issued a draft permit.  More than 300 people took the time to send written submissions that highlighted the potentially negative environmental, health, social, and economic impacts of this proposed site.  The CVRD, the CRD, the Cowichan Tribes, VIHA, and the Provincial Health Minister all added their voices to the opposition.  The Ministry of Environment’s Statutory Decision Maker, Hubert Bunce, found none of these concerns to be compelling.

In August 2013, the Ministry issued the permit.  The CVRD, the Shawnigan Residents Association (SRA), and three Shawnigan are residents, John and Lois Hayes, and Rick Saunders, immediately filed appeals.  Hearings were scheduled for March and a stay was issued, preventing SIA from bringing in contaminated soil until after the hearings.

In December 2013, SIA applied for a variance on the stay, and in February 2014 the Environmental Appeal Board (EAB) allowed them to bring in 40 tonnes of contaminated soil before the hearings commenced.  (During the hearings, we learned that in their sworn affidavit, the owners of SIA provided misleading information to the EAB – they claimed, for example, that their water treatment system was operational.  It was not.)

There were twenty days of hearings scheduled for March.  In the end, the hearings lasted 32 days, with additional dates in April, May, June, and July added as it became apparent that the volume of evidence required more time.  The SRA and CVRD brought in numerous expert witnesses including geologists, hydro-geologists, engineers, and a water treatment specialist.  The experts agreed that the information presented by SIA’s engineers, Active Earth, was inaccurate, insufficient, and at times misleading.  One expert, on the record, commenting on the proposed site stated, “this is crazy.”

Active Earth, the engineers whose survey and design of the site formed the basis upon which the Ministry of Environment issued the permit, did not testify during the hearings.  Indeed, there were no experts testifying on behalf of SIA to defend the site or the plans.  In their defence, only Marty Block, co-owner, appeared.  During his testimony, it was revealed that the only public support of the project, which came from the Malahat Nation, was agreed to in a confidential agreement between the two parties.  Mr Block denied that such an agreement existed, until the document itself was entered into evidence by the SRA lawyers.  In exchange for their support, Malahat was promised a “330 excavator and qualified operator for up to 7 weeks” as well as services of SIA engineers to address drainage issues, road grading and compacting services, and preferential employment for Malahat members at the SIA site. 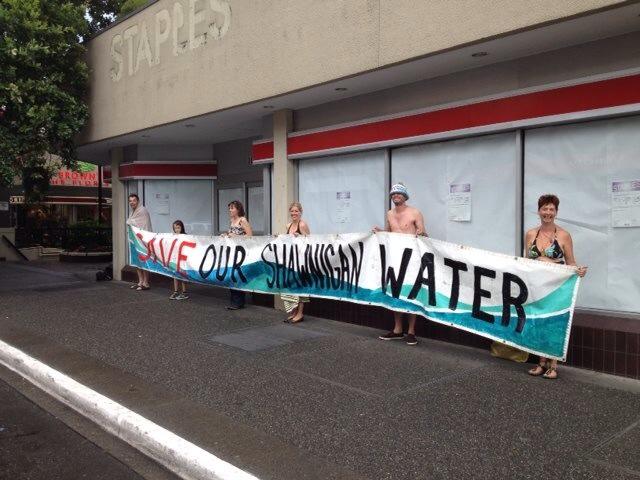 It was also revealed that SIA owed Active Earth $540,000.  This of course raised questions about the Active Earth reports, given they had considerable financial ties to SIA and an interest in the outcome of the permit process.

It is impossible to condense 32 days of hearings, but some of the most pertinent details were highlighted during the closing arguments.

Most importantly, the experts who testified were unanimous in their concerns about the location of this proposed contaminated soil site.  It became clear that this is indeed an inappropriate site for this type of dump, and that the contaminants present a clear risk, not just to the environment but to the long-term safety of the drinking water.  It also became clear that in the process of granting this permit, the protocols for selecting a site for contaminated soil were ignored.

Secondly, the Statutory Decision Maker (SDM) for the Ministry of Environment, Hubert Bunce, failed to do his duty.  Not only did he not once visit the site before issuing the permit in August 2013, but he also did not live up to a number of his responsibilities as outlined in the Ministry’s SDM Handbook.  Some of the responsibilities that he did not fulfill included ensuring that the process was transparent, consistent, and fair; having in-depth knowledge and specialized expertise; consulting with First Nations (Bunce did not respond to the Cowichan opposition to this proposal); addressing public concerns; verifying the accuracy of information and reliability of the experts; and assessing the current compliance and performance as well as the financial stability of the applicant.

Finally, as the hearings progressed, we learned of the questionable practices of SIA.  They are currently operating as a quarry under a Ministry of Mines permit, and there have been instances of non-compliance with this permit in the past.  These include possibly blasting below the water table level as well as blasting onto neighbouring CVRD parkland.  And as the lawyer for the Shawnigan Residents Association pointed out in his closing arguments, Marty Block committed perjury while under oath at the EAB hearings.  What does that tell about the suitability of this operator to reliably oversee a self-regulating permit?

The evidence against this proposal has been overwhelming.  The notion of putting the drinking water of 12,000 people at risk for the benefit of one business is insane.

The EAB panel has promised to be efficient in its decision-making.  We do not know when the ruling will be issued.  We do know that if they choose to uphold the permit, we will choose to continue to fight it.  The next step is a judicial appeal.

The Shawnigan Lake community is now holding its breath, hoping for the outcome they have fought for so passionately for the last two years.