Cara is the founder and executive director of Climate Access, a network for climate communicators. In Canada, through her consulting firm Social Capital Strategies, Inc., she works with government and NGOs on effective framing and community engagement.

OC: For a truly global problem, why are local responses to climate change so important?

CP: Working locally is critical because that is where emissions and impacts happen. It’s also where you can connect with people around shared values and love of place and can provide tangible, visible ways to act.

OC: What is happening in BC that people should know about?

CP: BC is becoming a global hub of climate innovation. Early on, the province instituted a carbon tax. We are the largest jurisdiction to count and reduce emissions through the carbon neutral government program, which is why the lights automatically turn off and you can compost at the airport and why VIU built a LEED Gold campus here in Cowichan with a green roof. Also, the province worked with local governments to establish the BC Energy Step Code, which is a net-zero energy-ready building performance goal that has already been adopted by 16 BC communities.

Many local governments are leading the way with developing the most advanced and transformational policies in North America. For example:

*Vancouver has adopted a Zero-Emissions Building Plan, becoming the first municipality in North America to outline a roadmap to achieve zero emissions from new homes and buildings by 2050. This informed the creation of the BC Energy Step Code, where the top level is a passive energy house--as of last year, there were about 300 dwelling units in Vancouver at near-zero or zero emissions compared to only one zero-emissions dwelling in 2014.

* Saanich has developed a new home energy labeling program that makes it easy for people to integrate energy efficiency considerations when they’re planning to buy or build a home.

* The city of Richmond has developed a policy that requires that all parking spaces in new residential developments be equipped with electric vehicle charging capacity.

OC: What is the role for local citizens in all of this?

CP: There is growing readiness in Canada and the States for climate action, as evidenced by climate strikes and declarations of climate emergencies, such as the motions recently passed in Duncan and North Cowichan. This is an important first step, but we now need to back it up with action, like what the City of Vancouver has done with its Six Big Moves-- they declared an emergency and then went back through their goals to increase targets and shorten timelines to achieve them.

Every community member is needed to respond, so we can be both prepared for impacts and to cut carbon emissions. Local governments can build community capacity by partnering with community members in planning and program development. I’ve been working the past few years  on a community engagement project in the City of Boston that is doing just that. Greenovate Boston is a partnership between the city and community that involves tapping, training and resourcing existing community leaders to work with people in eight city neighbourhoods to create climate mitigation and adaptation plans that reflect their values, tap local knowledge and have community buy-in. We are working to bring this to Richmond and Vancouver via the Canadian Urban Sustainability Practitioner network with the goal of taking it to other cities.

It is time to ask people to do big things, but do it in a way that makes taking action easy, understandable, accessible, fun and social. Local governments need to make it widely known what they are doing to address the climate emergency and where local citizens fit in—and provide them with menus of action items to take us along the pathway to low-carbon, resilient communities.

OC: What is something that local governments are doing that you’re particularly excited about?

CP: Local governments, largely in the States at this point, are starting to measure consumption-based emissions. Right now with the IPCC, measurements are based on what you burn in your jurisdiction—if your community has a LNG plant, you would count emissions from production. But this leaves out all the emissions that come when goods are used. For example, we don’t produce oil in BC, but we create emissions from the oil we import and burn in our cars. We also don’t measure emissions from our consumption of electronics, clothing, building materials, food, etc that were produced elsewhere. In many communities in North America, consumption-based emissions can be twice as much as the emissions created by producing things. Therefore, local governments and organizations have a role to play in creating alternatives to buying new things through reuse, repair and sharing. We can all play a huge role by avoiding buying new things and cutting back on eating red meat or eliminating it from our diets altogether. And we can ask our local governments to create a CBEI (consumptions-based emissions inventory).

I’m excited by this because while we can feel powerless in the face of climate disruption, we actually have a lot of agency here.

OC: How are local communities doing in terms of climate preparedness?

CP: Unfortunately, we’re not really ready for impacts that are already here such as extreme windstorms and snowstorms, let alone for what’s likely coming. Canadian communities are generally behind many in the U.S., so there must be much more effort on the part of local governments to develop adaptation strategies that will increase resilience. Equity needs to be an important component as not everyone is impacted equally. We can’t afford to wait any longer; we need to pay now into programs that will drive multiple benefits later on.

OC: As we think about advancing climate solutions in the Cowichan region, what advice do you have for local government and community leaders trying to engage the public?

CP: For most people, effective communication about climate change is not about a science lesson. Rather, it’s about the relevance of impacts and providing a pathway forward. People are worried about extreme weather, but at the same time they feel stuck between a rock and a hard place—they want to know the meaningful steps that can be taken to prepare for extreme weather and move away from dependence on fossil fuels, but they don’t know what that looks like or how to play a role. We need more focus on communicating about solutions and making it easy to plug in. 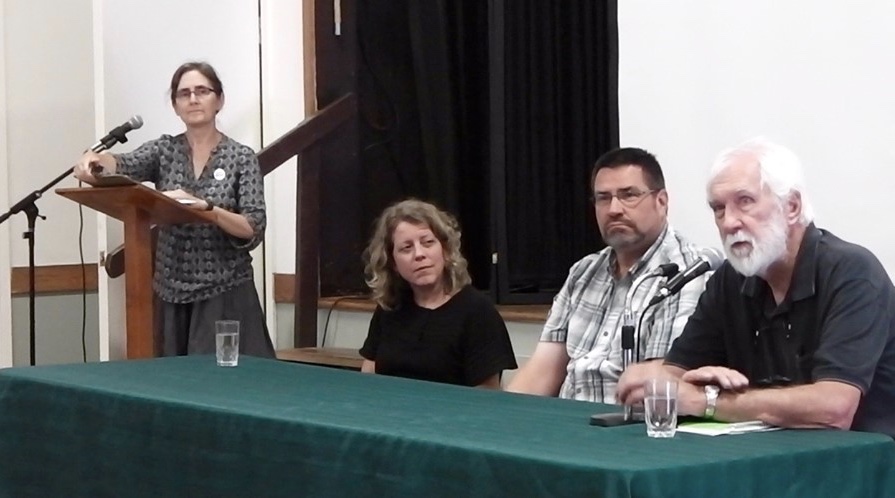 You can find responses by Cara (seated) and the other Beyond Climate panelists in these four video clips from the July 23, 2019 community discussion: