A big thank you to everyone who participated in the One Cowichan election survey. Back in May we commissioned a local poll through Insights West, but we also wanted to ask supporters and watchers directly what they thought.

So, let’s start with the usual disclaimer: unlike Insights West, this is NOT a scientific survey. We make no claims about the validity of the results – whoever chose to answer answered.

Still, we found this to be a useful snapshot, and will use it to guide our approach to the upcoming election, now perhaps just days away from being called. 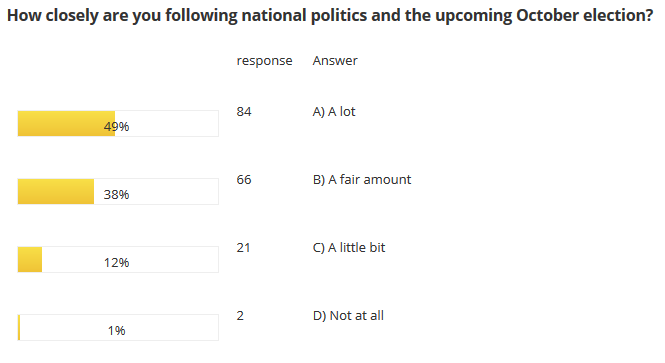 People taking the survey appear quite plugged into federal politics, with vast majority following it either “a lot” or “a fair amount.” That’s not super surprising – apolitical people probably wouldn’t voluntarily take this kind of a survey. 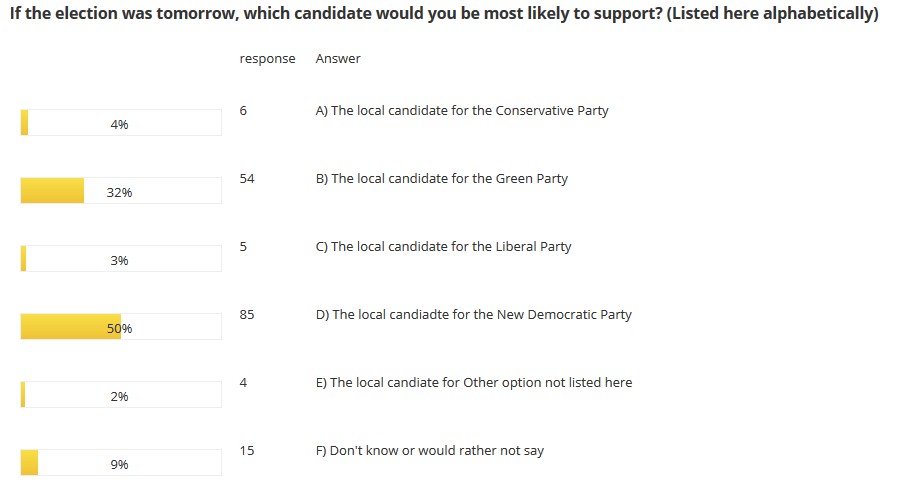 A good majority of people appear to be quite sure about who they will vote for, with about 30% less certain of their preference.

A majority of survey respondents say they chose the party/candidate that they most agree with, with a quarter saying they may vote strategically to block their last choice, and 15% saying it’s context specific.

In terms of the three open ended questions, we can’t reproduce all of the answers, but here are the themes and some select quotes:

What issue most motivates you to cast your ballot for one party/candidate or another?

The environment came out strong in people’s answers, whether it was climate change, renewable energy, water, or better stewardship over natural resources.

Democracy issues were also frequently mentioned, with the word “transparency” coming up a lot. There were also several mentions of wanting to shift to a different electoral system. Bill c-51 and the loss of freedoms/privacy is a concern for many.

Fairness also came through, whether in the form of reducing the burdens on the poor or middle class or protecting social programs for veterans and the more vulnerable, and protecting standard of living for seniors.

And, as good Canadians, we listed healthcare several times!

“I want to vote for a party that recognizes the urgency of climate change and is willing to deal with it in a socially responsible way.”

“It's not one issue.  It seems that federally Canada is being sold off while simultaneously being eroded from the inside, of its core values and rights.”

“Transparency and the need to put decision making in the hands of all elected representatives through proportional representation.”

What role do you think One Cowichan should play in the upcoming federal election?

The majority of answers to this question fell into three categories:

“Encourage everyone to vote. Offer assistance to anyone who needs assistance to get to a polling station. If you don't vote, you are saying everything is okay.”

“Keeping the electorate informed of party positions on important issues and polls.”

We particularly liked this idea for local candidates:

“Host an open house/debate?  Heck, put them all into a canoe and see who can get across Cowichan Bay solo, and see how he or she does in a crew in a dragon boat...”

Do you have any other comments about the upcoming federal election?

“This one is crucial to saving Canada's democracy.”

“I am very tired of partisanship.  I want people to be able to vote their conscience in Ottawa and I want people to work together across party lines for the good of all.  I am sooo tired of the disrespect shown across the floor.”

“If Harper gets in again I'm moving to Scotland.”

“I hope there will be a very large turnout of voters and a decisive outcome.”

“We have to have a change in Ottawa.”

“I look forward to a Parliament that abolishes first past the post voting, works cooperatively with one another, and with respect.”