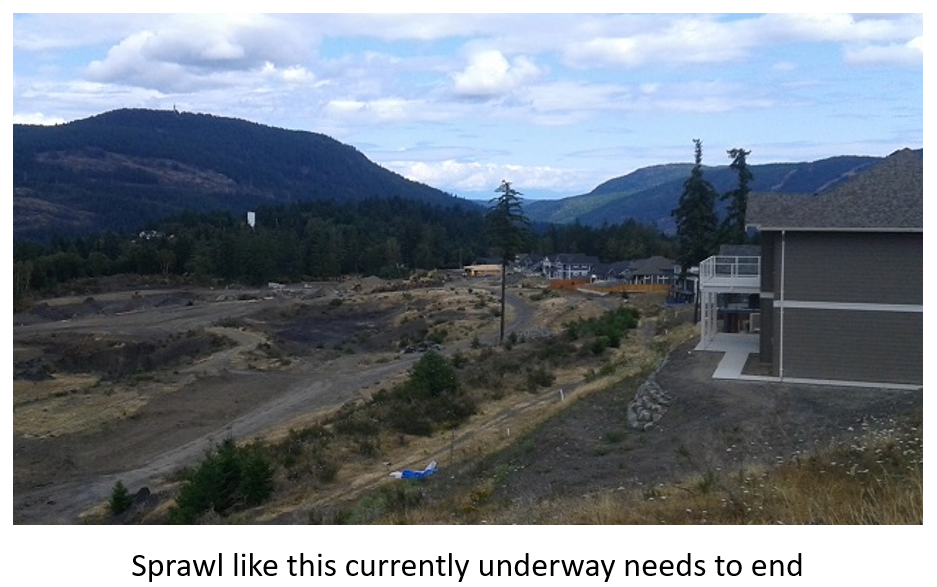 It’s true that municipal governments will need to adopt a multifaceted approach to climate change. There’s no one silver bullet on either the emissions reduction side or the adapting to climate disruption side.

But one metric stands out if local governments are going to take the climate emergency seriously.

The CVRD says that transportation generates 72% of greenhouse gas emissions in the region, compared to 58% provincially, and this is because 90% of our travel is done in personal vehicles. The reason for this is the successive decisions by our local governments over the years to approve development that forces people to get in their cars to do anything.

And, if we look around Cowichan, our local governments are still approving those types of development, driving up emissions when we should be driving them down, making the climate crisis worse, not better. This is despite acknowledging the problem in various studies and plans, which don’t seem to change what’s happening on the ground significantly.

North Cowichan’s 2013 Climate Action Plan did a good job of analysing the worsening trend under Business As Usual (BAU) and recommending options to change it, focusing in on what it termed “Vehicle Kilometres Travelled,” the sum total of how far residents drive in a year.

THIS is the metric that matters for our local governments on climate change: Vehicle Km  Travelled (in gas cars)

The qualification of gas cars reflects the emergence of electric vehicles that can drive down emissions, but aside from municipalities providing more public charging infrastructure (which is much needed), getting people into electric vehicles is more the jurisdiction of the provincial and federal governments, so municipalities must focus first on their main responsibilities. 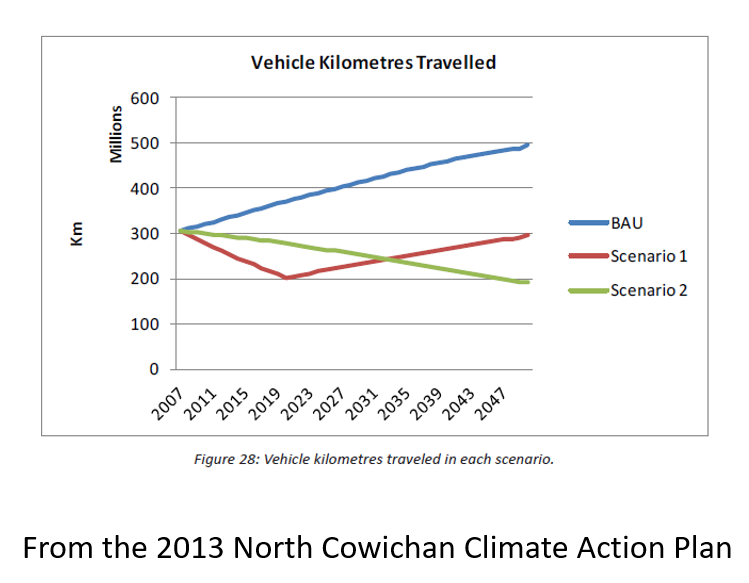 Put simply, if in the CVRD region the metric of Vehicle Km Travelled is going up, our municipal governments are failing on climate change. If it is going down – and at rates in line with climate science – then they are winning.

First and foremost, this means our local governments need to stop approving car-dependent developments, like right now. Each one is digging the hole deeper. The CVRD estimates that we’ll see another 25,000 people move into the region by 2050, which will drive up vehicle trips even more unless our housing stock changes so that many more people live close enough to work and amenities to walk, bike, or take public transit.

And the good news is that ending sprawl will save our region money, since sprawl entails higher costs all round.

North Cowichan has called for a regional growth plan for the CVRD, which could be helpful, but could also take years and end up being another one of those plans that don't change much on the ground. North Cowichan’s own Urban Containment Boundaries were found to be too lenient in its 2013 climate plan and haven’t stopped sprawl there. We need more targeted action sooner.

In addition to ending sprawl, other municipal measures should also include more aggressive active (human powered) and public transportation investments, which also depend on a better urban form to work well.

Now that local governments are acknowledging the climate emergency, the public can tell if they are serious if they are acting on the metric that matters and driving down Vehicle Km Travelled, starting today.